When I was small, my mother put me in a large 1pram, which she parked at the end of the garden so she couldn’t hear me. We lived on a farm on the east coast of Scotland where the weather was bad. But as long as it wasn’t pouring with rain, that’s where I stayed for a couple of hours every day.

When I reached the age of five, my mother waved from the back door of our house as my sister and I joined the other farm children for the two-mile walk across the fields to school. The journeys were 2challenging. There was Flika, the Shetland pony with sharp teeth, Bruno the paranoid Labrador and Willy and Ian, a couple of boys who had cut a dog’s head off with an 3axe and loved to push us into the 4nettles that grew along the sides of the path.

It was a 5tough childhood, a sort of 20th century version of agōgē, the rigorous regime for children popular with the Spartans that forced boys as young as seven to sleep on beds of 6rushes and swim in freezing rivers.

We have come a long way since then – both from Ancient Greece and Scotland circa 1970. Baby monitors mean our children are always 7within earshot. Their moments of ‘boredom’ are anxiously filled with a 8screen. We drive them here and there as though taxi driving was a 9thwarted ambition and when they’re hungry and thirsty, we order them pizza to wash down with a can of Coke. Once we have them controlled with our various 10quick fixes, we sit down with our partners or friends to dissect their possible 11shortcomings – do they spend too much time alone, go to the right school, have the right friends, talk enough, laugh enough, move enough or perhaps too much and so on. 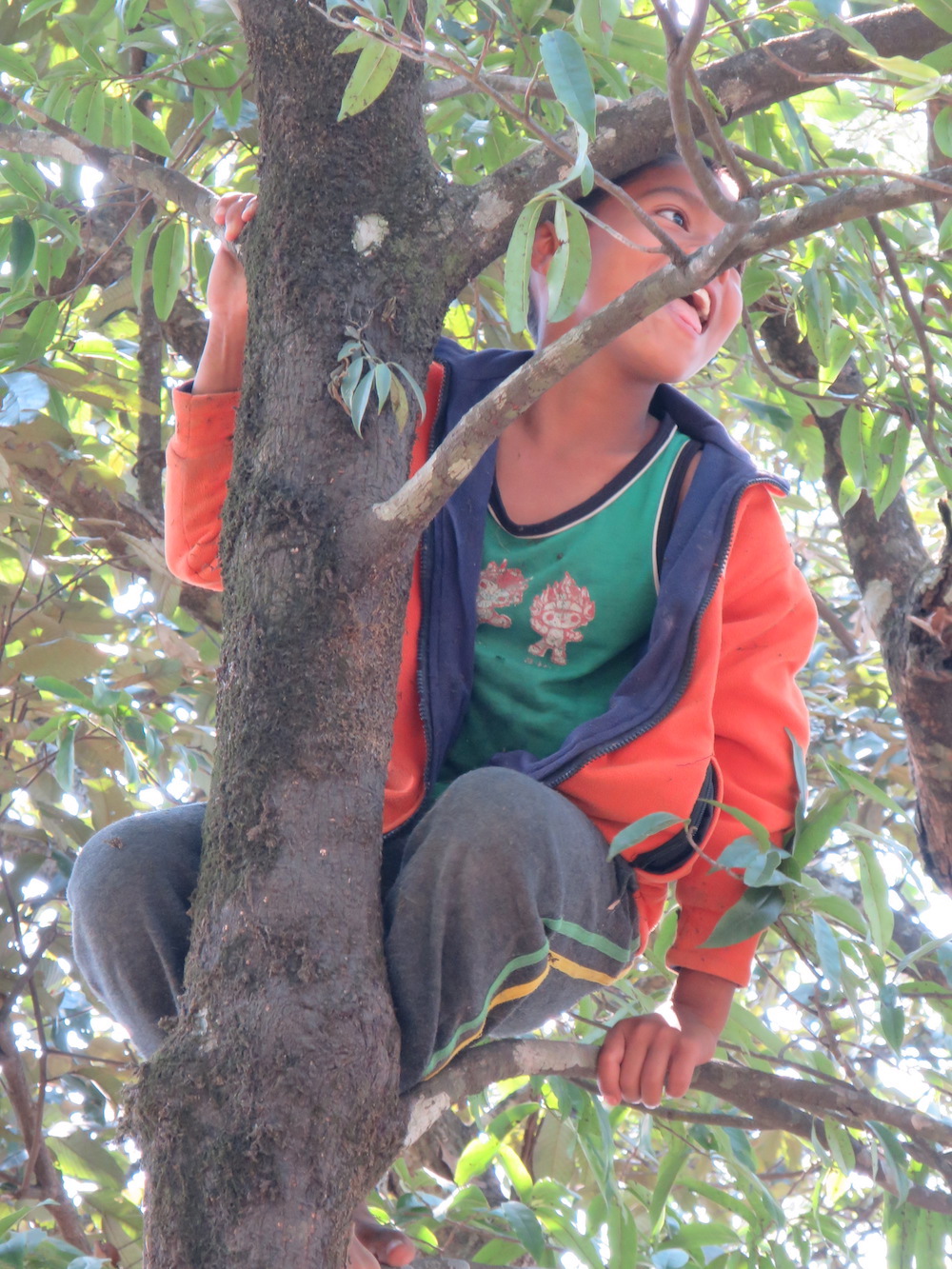 Fearless: a small boy climbs a tree in Nepal

This, in the words of Mercedes de Francisco, Lacanian psychoanalyst and author of Un Nuevo Amor, is “the age of constant vigilance”. Though no one is suggesting we should subject our children to freezing baths or 12fiendish small boys, our tendency to offer our children instant gratification is clearly not going to prepare them for the inevitable 13trials and tribulations of life that we are trying so hard to protect them from.

“There’s a paradox,” Mercedes tells Nómadas Solidarios. “Children are being both ignored and watched too closely. The first signs of excitement or intense activity are 14labeled hyperactivity. But if you were being watched closely for hours and days 15without respite, you would also become irritable and rebellious. Watch.” She then sits and stares at me until I start to 16fidget to illustrate her point. “The label allows you to ignore the child. It’s a way of containing and controlling. What the child needs is appropriate attention – to be listened to properly. Children have all kinds of wonderful things to say. It is worth giving them the space to be themselves without labeling their every move. It interferes with their 17development.”

Putting a label on someone is easy. “Job done!” we think with some satisfaction. It is, says Mercedes, the equivalent of 18locking a child in a cupboard.

Child psychotherapist, Luis Arribas, agrees. He takes issue with the new term, Generación Blandita – ‘generation of softies’ – because it interferes with the 19search for healthy strategies to foster resilience. “Children are weak if we overprotect them, but if we don’t help them, they become hard and cold,” he says. “Every time a child or an adolescent comes to see me, the first thing I do is to look for their 20strengths. I find something they are good at and work from there. This is where true confidence can be nurtured. It’s a position of strength that allows them to visit the places they don’t otherwise 21dare to go.”

According to Arribas, family organisation and habits are largely responsible for a child’s development. “There’s often a 22lack of attention to the child’s real 23underlying needs which will be different from what they think they are,” he says. “It can be difficult to convince families to abandon their screens long enough 24to be aware of them.”

It can help children to make them wait sometimes

Instead of trips to McDonalds or Media Markt, Luis suggests playing games as a family or going for a picnic in the countryside to increase confidence levels. Encouraging children 25to save up for their own things like bicycles or 26skateboards also empowers them. “As long as we 27acknowledge their feelings, if we teach them that they can deal with waiting, they will learn that they can prevail,” says Claire Jasinski, a family therapist and teaching supervisor at Atenea, Centro de Terapia y Formación en Sistemas Humanos in Madrid. “It’s important for children to learn that sometimes they will be thwarted, frustrated and challenged.”

Interestingly, Claire also says it’s important to tell our children how we feel. “It gives the child the opportunity to empathize and take care of others, and that gives them a feeling of power and usefulness in a world that doesn’t always 28cater to their needs, or those of their parents, teachers or friends,” she says.

24to be aware of: ser conscientes de

25to save up: ahorrar

28cater to: atender a