The culture clash in Benidorm

Although there are notable cultural differences between the British and the Spanish, for 60 years they have been 1thrown together by the pound and the sun in tourist resorts such as Benidorm where, according to the Benidorm Tourist Information Office, the British account for 50% of the city’s visitors.

This 2odd relationship began in the 1950s when the town’s 3mayor Pedro Zaragoza 4hopped on his scooter and rode to Madrid to ask General Francisco Franco 5to allow foreign female tourists to wear bikinis. Curiously, Franco gave his permission, but local girls in bikinis continued to be 6fined for indecent exposure.

Nowadays, the region of Valencia attracts more than 1.5 million tourists a year, many of whom descend on Benidorm – the Manhattan of Spain which is said to have the highest density of 7skyscrapers per inhabitant in the world. There, they continue to behave in a way that is 8out of step with the locals.

An 9action-packed destination, with five theme parks, shows, 10quizzes, competitions, Benidorm Pride and vast quantities of chips, Benidorm has a UK comedy series named after it which laughs at the type of Brit who goes there. 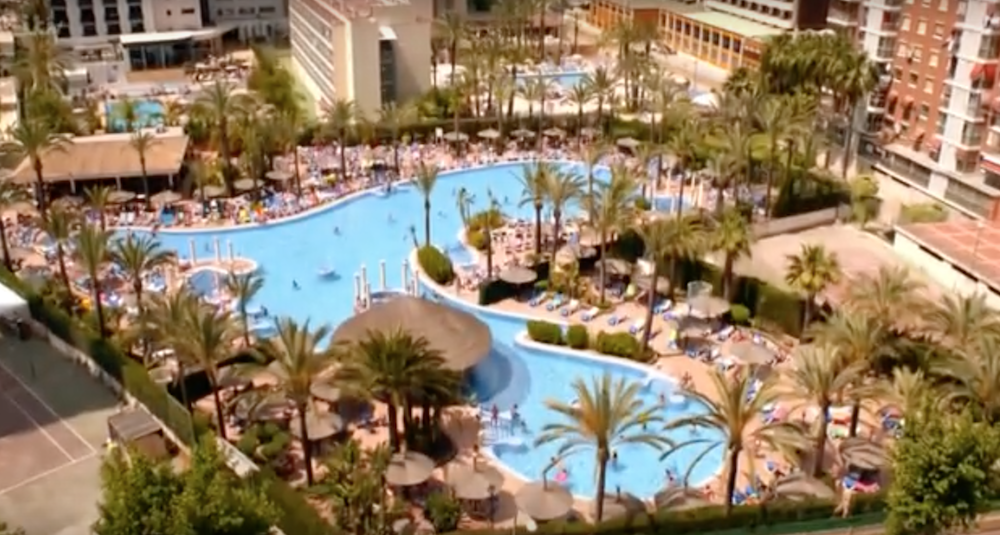 The compound where the TV series Benidorm takes place

The series 11takes place in a fictional 12all-inclusive resort where an 13assortment of UK 14budget holidaymakers spend their days turning red around the pool and performing karaoke after drinking liters of Sangria in the evening. Few leave the 15compound in case they have to spend money – one family refuses to tell their son there’s a beach down the road 16in case they will be required to buy him an ice cream. The show is so popular, it has won two national TV awards and a nomination for a BAFTA and is now on its 10th season.

So is this a true 17portrait of Spain’s most popular summer city? “Benidorm has many different faces,” Conrado Jimenez from the Benidorm Tourist Information Office tells Nómadas Solidarios. “There is the ‘Zona Giri’, then there are around 50 gay bars and clubs and, in the old town, you can find corners with a more authentically Spanish feel, though you do have to look quite hard for it.”

Apparently, Benidorm, the comedy, has had a positive rather than a negative effect on tourism with many tourists wanting to visit the compound where it is filmed.

With such an invasion of British culture, it is not surprising that the locals have trouble remembering they are in Spain. “They live from the tourism but they also want to maintain their identity and it’s not always easy,” says Jimenez.

It should be said, of course, that the kind of British culture exported to Benidorm represents only a 18slice of the UK, just as flamenco and bullfighting only represent a slice of Spain.

19Needless to say, many Brits want to distance themselves from this slice, even if they are happy to laugh at it on TV. But how do the Benidorm locals feel about it? “There are the young people who drink too much and lose decorum,” says Jimenez. “They do things they wouldn’t normally do in their own country and no one likes that. But this is balanced by the older tourists who are very polite.”

And do the Brits mix with the locals? “The young people are starting to venture into each other’s areas,” he says tentatively. Maybe. But it is far from a 20melting pot. The fact there is a ‘Zona Giri’ tells you all you need to know.

8out of step with: alejada de