Poor Tourist? No thanks!

Tourism-phobia is growing in Europe and poor tourists will suffer

First it’s immigrants, now it’s tourists. From Barcelona to Berlin, locals 1have had it with visitors, particularly poor ones, which, of course, are in the majority.

Tourism brings Spain 11% of its GDP while Amsterdam earns €80 million a year from tourists looking for Dutch 2charm and coffee shops where they can smoke marijuana without having the police breathing down their necks.

But poor tourists, staying at Airbnbs and simply 3hanging out with a cheap glass of wine or a hash cake, are no longer welcome, it seems. Europe’s most popular cities and beach resorts are experiencing a wave of discontent, culminating in 4demonstrations against tourists and, recently, an attack on a city tour bus in Barcelona which had its 5tires slashed and ‘Tourism Kills Neighborhoods’ painted across its windows.

Is this resentment justified or is it just a variation of xenophobia?

While digital platforms, such as Airbnb and Homeaway, have probably helped redistribute the 6spoils of tourism among the local population, they have also pushed up the cost of 7renting an apartment with some residents forced to vacate their rented homes in the summer so that owners can access the tourist market. Then there is the problem of holiday behavior. Brits on 8stag and hen weekends, for example, are not compatible with a peaceful, routine existence. 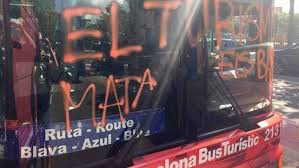 Now politicians are introducing measures to 9discourage 10budget tourism and put an end to cheap accommodation. In Mallorca and Barcelona, digital platforms that advertise apartments in the region could be 11fined up to €400,000. In Amsterdam, the city’s finance chief Udo Kock, wants to increase tax on tourism by €10 a day, making the poor tourist think twice before 12booking his flight.

“We need more people who actually spend money in the city,” says Kock. “We would prefer people who stay a couple of nights, who visit museums, have expensive meals at restaurants to people eating falafel while wandering around the red light district.”

But where does that leave the poor tourist? Almost 30% of UK nationals can’t pay for a week’s holiday as it is. That figure will surely increase with the new measures. The message? If you haven’t got 15money to burn, stay away!

1to have had it with someone/ thing: estar harto de

3to hang out: pasar el tiempo