Has Marine Le Pen’s traumatic past made her tough or terrified?

Marine Le Pen, 48, is said to be charming, funny and charismatic. She loves cats and karaoke and on May 7 she could be the next President of France. But behind the charm lies a peculiar past that has 1shaped her vision of the world.

Marine is the daughter of ultra-right 2firebrand Jean-Marie Le Pen, who led France’s National Front from 1972 until 2015, when he referred to the holocaust as a “detail of history” and Marine expelled him from the party.

She spent her early years in a Paris apartment with her three sisters and a 3nanny while her father Jean-Marie and rather beautiful mother Pierette Lalanne held parties and political meetings in the apartment below. Christmas was sometimes spent with nanny too – her parents loved to travel and 4were not always back in time.

A report showing Marine, aged six, 5being put to bed in a bedroom decorated by National Front posters emblazoned with the words “Marxist cancer” gives us some idea of the atmosphere that nurtured her infancy.

Two years later, a bomb attack on her family would 6shatter her sense of security 7for good. Twenty kilos of dynamite 8blew away an entire wall of the building, showering the terrified eight-year-old Marine with bits of glass and plaster. The perpetrator has still not been 9caught.

In her autobiography, Marine wrote: “That night I went to sleep like all little girls my age. But when I 10woke, I was no longer a little girl like the others.”

Cecil Alduy, the author of Marine Le Pen: prise aux mots, said, “She traces her worldview actually, about how violent the world is, back to this event that was so traumatizing.” 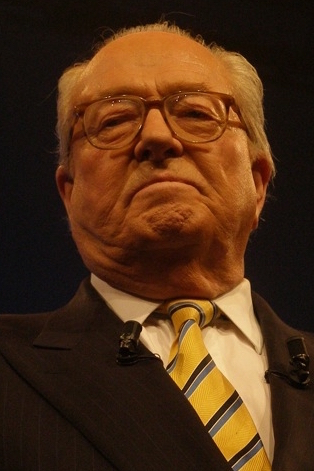 The attack made Marine 11realize that her family was different and there were people who hated them. This realization was reinforced by the fact that no one at school asked her home to play.

The family moved to a mansion guarded by Dobermans in a 12gated community in the Paris suburb of Montretout and Marine came home from school to politics, arguments and 13slamming doors. Her father attracted an 14unsavory crowd – Henri Botey, the Emperor of Pigalle – Paris’ notorious red light district – was both a friend and Marine’s 15godfather.

At 15, she came out of school one day to be told by her sister that her mother had left home to live with her father’s biographer. There was no note. Marine has said that she waited every day for some kind of contact with her mother, but none came. According to Olivier Beaumont, author of The Hell of Montretout, she was so 16upset, she stopped eating.

A vicious divorce followed. Jean Marie declared his wife could clean stairs for money. In revenge, Pierette did an almost-nude photo shoot for Playboy cleaning stairs, 17prompting Marine to call her mother “a public 18dump”. She spent the next 15 years with her distant and distracted father who took her to the morgue when she was 20 to show her the 19corpse of a party member after a traffic accident because he didn’t want the first corpse she saw to be his.

The world must have seemed a hostile place to Marine during her childhood and it is not surprising she emerged tough and 20scarred and very likely, beneath her suit of armor, scared. Her view of the world is 21rooted in violence, fear and abandonment. Her vision for France is one of protectionism and isolation from the outside world. French for the French, she cries. She says she wants to free France, but it looks as though she wants to put the country in a gated community like the one she grew up in, 22with all the trimmings.

4to be back: regresar

5to be put to bed: estar metido en la cama

22with all the trimmings: con todos sus adornos