When I first 1found out about the children’s home Omwaana Tugende, which 2is run by the Spanish/ Ugandan NGO Adelante Africa, I wasn’t sure what it did and why it was necessary. Had there been a war in the area, I 3wondered. Why were there so many 4orphans? It was all very 5vague and 6far away.

At the time I was working for Hello! magazine and only playing with the idea of 7setting up Nómadas Solidarios. Thankfully, that period of my life came to an end and I had the chance to travel to Uganda and not only see Omwaana Tugende for myself but stay there and meet the children I had wondered about.

Just outside my room, there was a 8verandah where two baby boys spent much of their day looking out at the world. Their names were Blessing and Ajouna. Both had been brought to the home because their own parents were having trouble taking care of them. 9Neither smiled or played. They simply sat and watched the other children whose traumas were 10further behind them and who ran happily around the 11grounds of the 12orphanage. 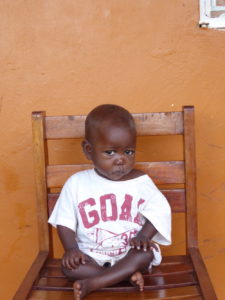 It is hard to see two baby boys with huge soulful eyes 13staring out at the world and not feel your heart 14melt. Ajouna was more independent and liked to climb up onto the chair on the verandah where he sat and asked for nothing. Blessing, on the other hand, liked to 15be picked up and was happy to fall asleep in my arms or in the arms of the little girls who wanted 16to mother the babies.

17It wouldn’t have taken Blessing long to join the other children in their games. Perhaps only months. He was getting stronger and braver. While I was there, I saw his first smile. It was 18crooked and odd but it was a smile all the same.

But Blessing never got to run around and laugh with the other children or attend the nursery school and sing their songs. He died at Christmas during a few days with his family of a sickness that the Omwaana Tugende only found out about after he was dead.

Life is a precarious 19business for children in rural Uganda, but for the most vulnerable among them, homes like Omwaana Tugende give them the chance of life.

I now understand the role it plays in this remote corner of Africa.

1Find out about: enterarse de algo

2To be run by: estar gestionado por

13Stare out at: mirar fijamente a

15To be picked up: estar cogido en brazos

17It would have taken: hubiera tomado