Going bananas off the beaten track in Uganda

When I told my two daughters I was going to Uganda, they laughed. “If you eat a banana, you have to video it!” they said.

Let me explain. Because of some strange childhood trauma, I hate bananas. Now, you are probably thinking this apparently innocuous fruit would be the least of my concerns traveling as a woman alone in a country that produced the demented Last King of Scotland, Idi Amin, and the crazed Joseph Kony whose army of abducted child soldiers terrorized the north until 2006. Not so. As I traveled from one village to another, my only real worry was how inevitable the video was beginning to seem.

A safer and cheaper option than its more famous neighbors, Kenya and Tanzania, Uganda earns millions of dollars every year from visitors to its 10 spectacular national parks. And, though I was there to check out community tourism as a means of self-reliance in developing regions, I couldn’t fly all the way from Madrid to this wildlife mecca without a glimpse of what makes Uganda “The Pearl of Africa”. So I drove northwest from Kampala to Murchison Falls where the River Nile 1thunders through a seven-meter 2gorge and got myself some 3eye candy in the shape of elephants, hippos and chimpanzees before focusing on the rich local culture.

Just 100 meters from the park, children played unsupervised on the side of the road that was, as is often the case here, no more than a 4dirt track. With easy smiles, they ran around in 5rags, oblivious to the land cruisers that 6missed them by a whisper in their 7rush to see the flora and fauna on the other side of the park gate. 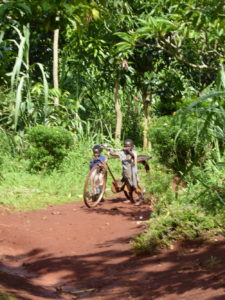 My eyes 8popped. Pedestrians appeared to survive by pure coincidence in this country. Life is cheap – a phrase that can be interpreted both ways. Not only is it a case of 9easy come, easy go, the business of living really does not involve a lot of money. “A lot of people don’t have money here,” explained Ednah Vyabali Vyalemi,a quiet tour de force who manages the Boomu Women’s Community Campsite when I asked her about the benefits of living close to the park. “They eat what they grow around them. The children can’t study because they have no electricity. They speak about aid, but we never see it.”

The Boomu Campsite is situated between the park gate and a village of 10mud huts with mud floors and no 11running water or sanitation. Boomu itself offers 12lodgings in simple banda huts 13set among colorful gardens. The money from the enterprise has helped to put a number of teenagers through high school. The project also helps villagers by 14sourcing local produce and providing primary kids with school material 15in exchange for traditional song and dance performances.

It was, of course, at Boomu that the banana, known locally as matoke, 16threatened. Swinging a machete casually over her shoulder, Ednah hacked apart a matoke palm and showed me how 17to steam the fruit and 18mash it like a potato. 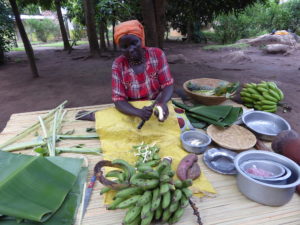 I watched with some consternation as the process came to an end, but was spared the mash, enjoying instead a dinner of rice and 19eggplant, which Ednah produced with the help of a group of local teenage orphans she had 20taken under her wing.

Community tourism is growing in Uganda out of sheer necessity and because the people are natural entrepreneurs. Their main problem is the inertia of politicians who have been in power too long. In fact, Donald Trump’s election victory was met with 21rejoicing here as one of his extravagant campaign promises included the removal of the country’s president, Yoweri Museveni, 72.

But in remote communities such as Igayaza, south of Hoima in Kibaale district, no one is looking to politicians to solve their problems.

Igayaza is where the Spanish-Ugandan NGO, Adelante Africa has been operating for the past five years. A strictly non-profit entity, it was borne out of an act of kindness – a group of locals helped a group of passing tourists out of the mud that makes the dirt roads difficult in the rainy season. Now members of the community have decided to 22launch a tourism initiative, offering visitors en route from Murchison Falls to national parks such as Kibale Forest and Queen Elizabeth, a cultural experience of what turned out to be 23disarming authenticity.

In the role of lab rat, I ran through a number of activities, starting with a tour on a boda boda motorbike of the various Adelante Africa projects, including a secondary school, an 24oil press and water tanks. Sunday meant church, an exhilarating affair with lively singing and drumming and a 25stack of bananas at 26the altar. Ugandans are as keen on Christianity as they are on bananas and, on my travels, I spotted the Jesus Cares supermarket, the Good Role God clothes shop and the God Bless You bus route! 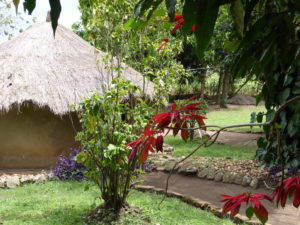 At the end of the service, the bananas 27were auctioned off along with several 28hens and a few watermelons and the Adelante Africa children’s home, Omwaana Tugende, ended up with the lion’s share of the fruit – fuel for the kids who accompanied me on 29a hike with songs and jokes about snakes.

“I am trying to get across to communities that any of them can offer tourism activities to supplement their income,” said Maria Baryamujura, the founder of the COBATI community tourism association. “Above all, it is a means of empowering women. The strength of African women is what has kept Africa together. They have produced the food and looked after the families down the centuries. Once the woman has a better income, the family has better nutrition and hygiene.”

Maria’s husband was killed during the Idi Amin era, leaving her to bring up her family. Now, she dedicates her time to encouraging others to become self-sufficient. Her work focuses on region around Mbarara, midway between Kampala and seven national parks, including the mystical gorilla haven of Bwindi. Being the President’s birthplace, there are signs of investment – the odd electricity line, 30tarmac roads and the houses, less 31hovel than I had seen en route. But as I was shown by the Kibingo Community tourism project how to make banana beer with 32sieves made of grass and pipes made of palm, I was aware that rural Ugandans who make up 80% of the population are 33pretty much 34thrown back on their own resources in a way that would paralyze most of us in the West today.

6missed them by a whisper: rozar

13to set among: estar ubicados entre

15in exchange for: en cambio de

20to take under one’s wing: tomar bajo su ala

27to be auctioned off: estar rematado

34to be thrown back on one’s own resources: obligar algn a recurrir a sus propios recursos