Exercise is important for building brainpower

Want to improve your capacity to learn English vocabulary? German researchers 1funded by the German Research Foundation found that riding an exercise bicycle 2DURING learning improves retention. In a study published in the Public Library of Science (PLoS) several years ago, 81 healthy young German women were given a list of Polish words to learn. The experiment found that those cycling as they memorized the words 3scored highest when tested two days later.

In fact, the link between exercise and the brain is widely recognized, with a 4consensus statement signed last year by eight countries, including the UK, declaring exercise to be vital to mental 5as well as physical health and beneficial to academic 6performance.

Here’s how it 7works: according to neuroscientist Ben Martynoga, exercise increases the flow of blood to the hippocampus – the part of the brain responsible for learning and memory. As people 8get fitter, the hippocampus actually grows.

Numerous studies have been carried out to prove the 9link between exercise and mental performance. In Holland, primary school children were made to alternate lessons with 20-minutes of aerobic activity, which increased their 10attention spans. In the US, a study found that 40 minutes of daily exercise increased the IQ of primary school pupils by 3.8 points while the fittest 11-year-olds scored 30% above 11average in tests and the least fit scored 20% below average. Among older students, those doing regular sport scored 20% better in math, science, English and social studies. 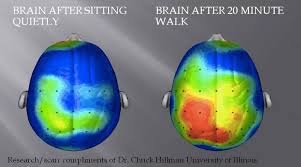 The brain before and after exercise

While schools in much of Europe determinedly ignore the research, Scandinavia has factored it in. Copenhagen’s Trane Overgaard School, for example, attended by Queen Margrethe’s grandchild Prince Christian, believes there is a clear connection between fitness and developing intelligence and ensures that movement and aerobic activities are fundamental to every school day.

But in many European schools, children are ironically too busy studying to exercise sufficiently. The World Health Organization (WHO) recommends 60 minutes of moderate to vigorous exercise a day for 5-17 year olds but a 2013/ 2014 WHO study found that only 17.3% of Spanish girls between the ages of 11-17 were getting close to that and only 31.7% of boys.

For the best results, alternate study with exercise

Exercise is cut from the curriculum altogether by the second year of baccalaureate in Spain, but for students who want top 12marks, the best advice is definitely to revise AND exercise.

5as well as: así como

8to get fitter: ganar en forma