Its 1former students include 19 British Prime Ministers, Prince Harry and Prince William, Homeland’s Damian Lewis and The Danish Girl’s Oscar-winning actor Eddie Redmayne, so it is not surprising that Eton is the most famous 2public school in the world, attracting many students from abroad, including 30 from Spain.

Described by the UK Good School’s Guide as “3second to none” 4with regard to teaching and facilities, it costs €41,000 a year. Not cheap but not the most expensive establishment 5of its kind either. Switzerland, for example, has a number of 6boarding schools for double the price but possibly half the prestige.

Founded in 1440 by King Henry VI, it has long been associated with privilege, but in recent years, the school has helped 263 boys with up to 60% of their 7fees while 63 boys are 8on full scholarships. Around a third of its 1,300 students go on to Oxford or Cambridge University.

So what makes Eton so special? Nómadas Solidarios spoke to JG, a pupil in his final year about life at the Windsor all-boys boarding school where 9waistcoats and 10tails are 11de rigueur. 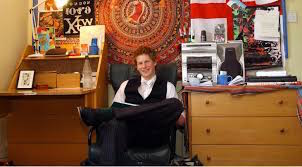 Prince Harry in his room at Eton

What’s a typical day at Eton?

“The first alarm goes at 7.30am. Then we have breakfast. Half the school has breakfast in the canteen but our house has its own dining hall. There’s 12chapel everyday and lessons start at 9am and go on until 1.25am. Then there’s lunch and three hours of sport – football, rugby or raquet sports etc. At 4.30 we have more classes until 6. Then there’s homework and supper and then free time between 8pm and 11pm. We get about three hours of homework a day, so we often have to do it in our free time. We also have four lessons on Saturday morning.”

Is everyone really rich?

“Not everyone, although there are still quite a lot of people who wear a 13signet ring with the 14family crest on it. But there is one house where all the boys are there for free. They are called collegers and they are the cleverest people in the school. They have to wear black 15capes. They all go to Oxford or Cambridge – 100%.”

Do they mix well with the other boys?

“More or less. Some of them are a bit 16socially awkward because they’re, you know, so clever, but it’s fine. There are lots of other people on scholarships too.”

Can anyone get into Eton if they have the money?

“Not anymore. You have to do exams to get in. About 60 years ago, you just had to be rich or have a father who went, and the academic level was quite ordinary because of all the 17inbreeding, but now it’s more democratic. People come from everywhere, especially Asia. But there are also black and Arabic guys. There are four black guys in my year.” 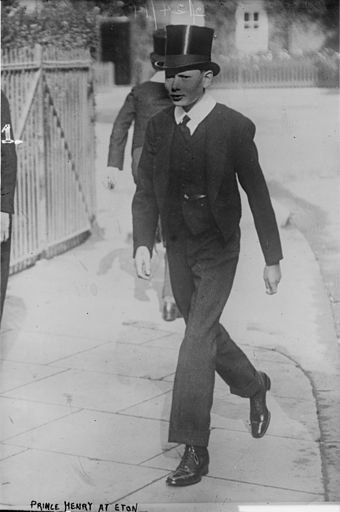 Prince Henry, Duke of Gloucester at Eton in 1914

Is there any problem with racism?

“None. If you’re 18caught making racist comments, you 19get kicked out of the school.”

What about bullying? English ‘public’ schools used to be notorious for that.

“Obviously there is some but it’s not bad. The first time you’re caught bullying, you get suspended. The second time, you’re out. They’re really 20on top of things because of the publicity. There’s also a school therapist you can go to and tell things to anonymously.”

Does the atmosphere get tense with 1,300 boys living together?

“It’s generally good, though at the end of a 15 hour day you get tired. We have a room to ourselves and we can go there and 21chill out – we never have to share. There are no 22dormitories.”

What do you do at the weekends?

“Between the ages of 13 and 15, there are discos with the girls’ schools nearby. But it’s really awkward. There’s no alcohol and you hardly know the boys you’re with yet, never mind walking up to girls you don’t know. It’s easier just to meet these girls through friends when you’re away from school. When you’re older, you can go out into Windsor. The school has a pub for 17 and 18 year olds and you are allowed two pints.”

What do the locals think of you?

“We are not allowed to wear our tails outside of the school. We just wear 23tracksuits and jeans and we are very good at changing our accents and adapting so people don’t necessarily know we are from Eton.”

What makes it so special?

“There are a lot of trips. The Russian society went to Russia last year and had a cabinet meeting with Vladimir Putin. They said he was friendly. People also come to give talks here. Nigel Farage [former leader of the UK Independence Party (UKIP)] came. He was a great speaker whatever you think of his politics and Michael Gove [former Secretary of State for Education and Justice] and the boss of MI5. They are going to 24host the Ted Talks at Eton soon as well. Six of them.”

What do people go on to do when they leave?

“Almost everybody goes to University. Most people get A*. The average GCSE result is 7.5 A*s. That’s higher than you need for Oxford, which is 7 A*s. A lot of people become politicians when they leave, or bankers and lawyers and entrepreneurs. The guy who started Buzzmaids was at Eton. His father gave him 10,000 pounds and he invested it in bitcoin and made loads of money. Then he started this cleaning service app. Eton is a great place for 25networking because lots of people’s fathers are very successful and they can help you 26get a foot in the door. It’s good for that.”

3second to none: insuperable

4with regard to: con respecto a

5of its kind: de este tipo

12to have chapel: ir a la capilla

18to be caught: estar pillado

19to get kicked out: estar echado a patadas

26to get a foot in the door: meter el pie en la puerta