Banksy, the West Bank and the Walled Off Hotel

Everyone has heard of the West Bank and Gaza, the Occupied Palestinian Territories. But few have cared to visit the two pieces of land the Palestinians ended up with in 1948, and which have been occupied by the Israelis since the 1967 War. Now, with his Walled Off Hotel that opened in March, Banksy, the anonymous British street artist and colleague of Sam 3, hopes to change that.

Few visit because the West Bank and Gaza are synonymous in our minds with conflict. What happens in this corner of the world has been happening for so long, we have become immune to it. It sounds 1unfair but it is so far away. The conflict looks as though it will never be solved. And it doesn’t affect us.

But is this true?With a lot of politics and a touch of humor, Banksy suggests we should all go and see one of the main radicalisation 2triggers for young disaffected Muslims first hand.

Banksy on Gaza: “A vast outdoor recruitment center for terrorists”

As Banksy said through his publicist to The New York Times after a trip to Gaza, “I don’t want 3to take sides. But when you see entire suburban neighbourhoods reduced to 4rubble with no hope of a future—what you’re really looking at is a vast outdoor 5recruitment centre for terrorists. And we should probably 6address this 7for all our sakes.”

Sam B and his wife Rosie have just come back from a visit to Bethlehem in the West Bank where Banksy has 8set up his hotel. The hotel has a great view of the huge 9concrete barrier that separates the Palestinians from the Jewish 10settlers living inside the West Bank and also the rest of Israel. So, with typical irony, Banksy has called it the Walled Off (Waldorf) Hotel. 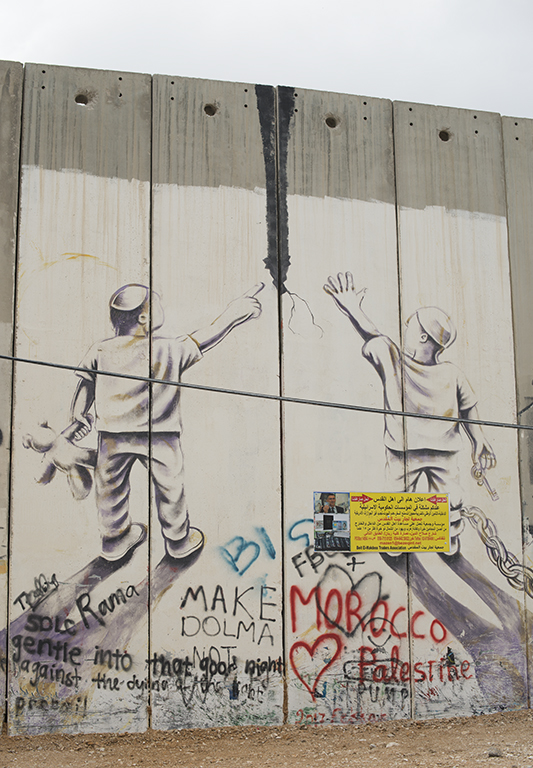 The huge concrete wall in Bethlehem with Banksy’s art work and other graffiti. Photo: Rosie Berwick

An Israeli ‘security’ measure that is considered a barrier to peace, Banksy has used this wall as a 11canvas for some of his most political art. Tourists are also encouraged to 12spray their own messages that are regularly 13painted over to make way for new ones.

Sam, a retired Londoner, has Jewish roots and he wanted to see the land of his ancestors, but it was the couple’s visit to the West Bank that left the biggest impression.

“The Wall in Bethlehem is shocking”

“The wall in Bethlehem is shocking and I’m not alone in feeling like that,” says Rosie, a photographer who took the photos for this report. “14Your heart sinks because it really looks like a prison.”

Inside the hotel, Banksy has put 15surveillance cameras and rudimentary 16weapons on the walls where in other countries you might find 17deer antlers or a bull’s head. Bit it’s not a hostile environment. “The atmosphere in the hotel is very friendly,” says Rosie. “It’s 18quirky with a lot of humor and really unique.” 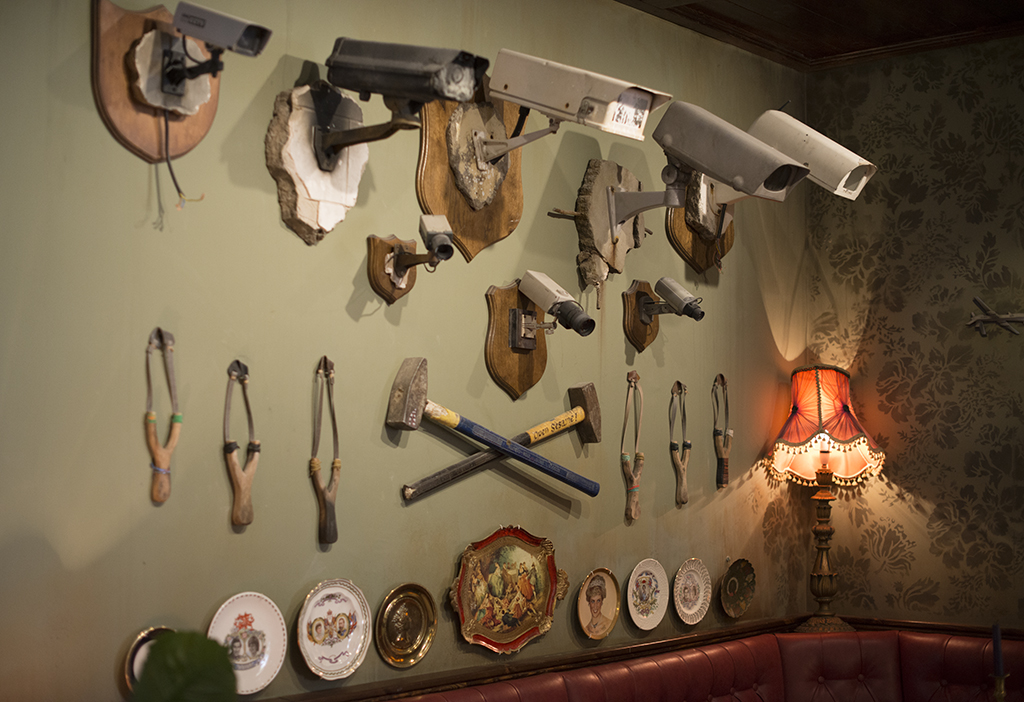 Inside the Walled Off Hotel, walls are decorated ironically with surveillance cameras and street weapons. Photo: Rosie Berwick

The West Bank has not been devastated in the same way that Gaza has. In fact the couple were surprised to see the buildings intact and a lot of agriculture ­– orange and olive groves – in the countryside. As long as the Palestinians are using the land in some way, it is less likely to be 19commandeered by the Israeli settlers.

“We felt safe,” says Rosie, “But we stopped at a shop and spoke to the Palestinian owners who had been 20beaten up for being open on Shabbat –­ Israel’s day of rest, even though the shop was in Palestinian territory.”

She adds that while she was speaking to the shopkeepers, Sam could see a group of menacing-looking Jewish boys approach, clearly not happy to see the shop open because that day too was Shabbat, despite the fact that, officially, Israeli civilians should not be on the Palestinian side of the wall. 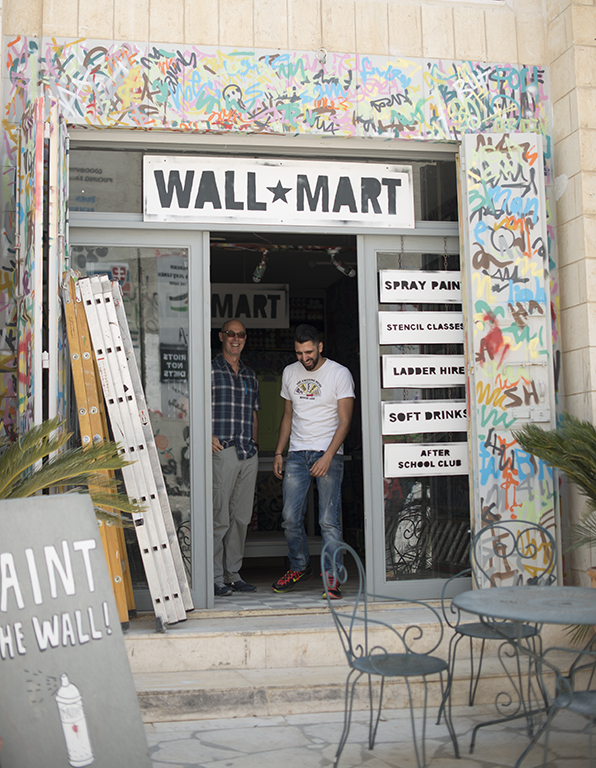 The Wall Mart shop in front of the wall that sells spray paint and stencils for graffiti. Photo: Rosie Berwick

At Wall Mart a shop selling the spray paint and 21stencils for graffiti, the couple were told by the owner not to buy tourist 22trinkets from the kids 23hanging around outside. “I don’t want you buying that junk from those kids,” he told them. “They need to go to school. They need to know it’s not alright to live like this.”

7for all our sakes: por el bien de todos

8to set up: establecer

13to paint over: cubrir con pintura

20to beat up: golpear

23to hang around: pasar el rato